Did you know starting this month Google Chrome will start displaying prominent “Not Secure” notification on websites without an SSL (secure sockets layer)?  If you’re not sure, visit your website and check the address bar. If you have an SSL installed, you will see “https” vs. “http”.  If you don’t have one, users will be deterred from visiting your website.

Avoid having your website flagged by Chrome as not secure. Install an SSL certificate for your domain and subdomains and offer your website visitors confidence and protection when they go to your site.

More about why it is important to install in SSL on your website. 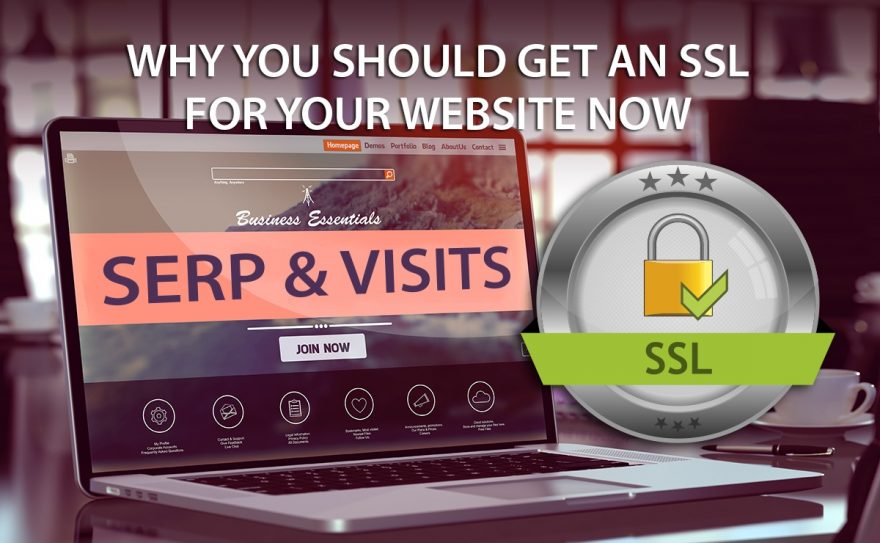 We’ve always installed SSLs for clients with websites accepting online payments.  We did not necessarily recommend SSLs for non-ecommerce sites.  This is not the case any more.

Do you I reallly need an SSL Certificate? How will it benefit my online business? These are some of the questions you might be asking yourself.

It turns out you need an SSL for your website more than ever.

SSL (Secure Socket Layer) is a technology that encrypts connections between an Internet browser (and other “client” devices) and a web server so that hackers can’t intercept sent data. When used in an http connection, the connection becomes https (secure https), the “S” being a sign that your site has an SSL Certificate. For example, https://umeworks.com (secured) vs. http://umeworks.com (not secured).

If the connection between your computers and your server isn’t secured, hackers can use specialized tools to intercept the data on transit, e.g., use it to access consumers’ bank accounts.

So, the number one reason to use SSL is to protect sensitive information being sent across the internet. The SSL technology does this by encrypting all data before it is sent. This way, even if somebody intercepts it along the way, they cannot make use of it because the encrypted information will only be readable to the server it is being sent to.

However, even non-ecommerce sites should use SSL Certificates because of recent changes.  Small businesses can benefit in using SSL four ways:

Web browsers such as Firefox are currently giving visual cues to help users determine whether or not a website is using SSL. For a secure https site, there will be a green padlock right at the beginning of your URL. In some cases, the entire URL bar may be colored green – all of these aimed at telling the user that your site is safe. HTTP sites don’t have the green padlocks. For a business, these cues can have a big impact on user trust.

While other browsers just display the green padlock, the new version of Google Chrome which was released at the end of January is blatantly warning users against visiting insecure sites. Just before your URL, there will be a “Not Secure” warning which could deter users from visiting your site. Google has said that at a later stage, they will in addition to the “Not Secure” warning place a danger sign next to your URL to further advice users against visiting your site.

Actually, this started back in mid 2014 when Google announced that having a 2048-bit key certificate on your site will give you a minor ranking boost. At that time, Google said that SSL Certificates would have only a small impact on search results. But in their renewed efforts to make the web a safer place, the company has made SSL a permanent ranking factor and has mentioned being open to giving it more weight than other signals.

Initially a barrier to acquiring the technology, SSL prices are now within reach for small businesses. GeoTrust, for example, offers a number of SSL certificates, including the Quick SSL Premium which goes at just $149/year. Thawte also has a low priced offer, the Thawte SSL, which is priced at $149/year. Pricing depends on several factors including brand, warrant and encryption levels. Many hosting providers offer SSLs you can purchase from within your control panel; some for less than $100/year.  So, installing an SSL certificate on your website via your current hosting company may be inexpensive and the fastest way. You can now acquire SSL Certificates free with LetsEncrypt.com, a service run for the public’s benefit by Internet Security Research Group.

Check to see if your hosting company support Free SSLs

For these reasons, if you don’t have SSL already, you need to make it a priority. It will be of immeasurable benefit to both your business and your customers.

Need help? UmeWorks can install your SSL for a nominal fee. Contact Us

Any cookies that may not be particularly necessary for the website to function and is used specifically to collect user personal data via analytics, ads, other embedded contents are termed as non-necessary cookies. It is mandatory to procure user consent prior to running these cookies on your website.